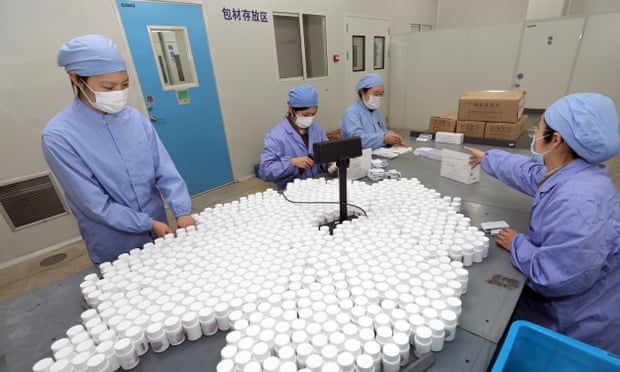 Can chloroquine really help treat coronavirus patients?
Although Trump’s claim about the drug was false it might play a role in tackling the pandemic

Claims by Donald Trump regarding the effectiveness against coronavirus of an anti-malarial drug untested against the disease have led to it being hoarded, as well as to at least one death in the US and a number of overdoses around the world.

Trump called the drugs chloroquine and hydroxychloroquine potential “gamechangers” during a press conference last week, spurring a rush by some individuals – and even countries, including Algeria and Indonesia – to stockpile the drugs. India, meanwhile, has announced it will ban export of the drug.

While New York state has ordered 70,000 doses for an approved clinical trial in combination with another drug, Trump’s intervention has led to at least one death after a man in Arizona took a non-pharmaceutical version intended for use in killing parasites in home aquariums.

New research published on Wednesday suggested that “off label” re-purposing of drugs such as hydroxychloroquine could lead to “drug-induced sudden cardiac death”. The paper by the Mayo Clinic, a nonprofit medical organisation, found that chloroquine and Kaletra, a HIV drug also being used against coronavirus, can cause the heart muscle to take longer than normal to recharge between beats.

Trump’s comments, for which Dr Anthony Fauci, the head of the US National Institute of Allergy and Infectious Diseases, said there was only anecdotal evidence, prompted some experts to warn of the risk of individuals self-medicating with untested and inappropriate drugs.

“The last thing that we want right now is to inundate our emergency departments with patients who believe they found a vague and risky solution that could potentially jeopardise their health,” said Daniel Brooks, the medical director of the Banner poison and drug information centre in Phoenix.

Already some patients who rely on chloroquine for other conditions – including lupus and rheumatoid arthritis – have complained about not being able to find the drug.

Among them was Stacy Torres, a US academic who wrote an impassioned first-person piece for the Washington Post pleading with people not to hoard the drug.

While chloroquine is one of several drugs – including existing flu medicines and HIV retrovirals – being examined around the world for their potential to reduce symptoms in those who have the disease, not as vaccines, its efficacy has yet to be properly established in clinical tests.

Chloroquine was first looked at by researchers during the 2002-03 outbreak of Sars, a coronavirus with substantial similarities to Covid-19.

A study in Virology Journal in 2005 found that chloroquine inhibited the Sars virus in primate cells after infection, as well as inhibiting infection before exposure, successfully reducing the so-called viral load that other recent research suggests may be a predictor of severe cases.

The idea is that existing drugs such as chloroquine that could slow or even kill coronavirus could save the lives of severely ill patients and also protect health workers.

The interest in chloroquine and hydroxychloroquine is serious enough that the World Health Organization has identified them as one of four potential therapies to include in a global trial known as Solidarity, along with three other potential drug therapies.

Coronavirus map: how Covid-19 cases are spreading across the world
Read more
Interest in chloroquine as a treatment for coronaviruses was initially reignited by a letter from Chinese researchers to the BioScience Trends journal this year that suggested it had “potent efficacy” in treating pneumonia caused by Covid-19, but no data on studies has yet been shared with the World Health Organization.

Despite the interest in chloroquine as an anti-viral treatment it has proved to be a dead end before in human trials for other viruses, including dengue and chikungunya.

“Researchers have tried this drug on virus after virus, and it never works out in humans. The dose needed is just too high,” Susanne Herold, an expert on pulmonary infections at the University of Giessen, recently told Science magazine.

The hype around the drug, however, has caused some countries to rush to acquire stocks, leading some to warn that it might not be available for those who need it for proven applications such as malaria and some forms of arthritis.

Share your story
Share your stories
If you have been affected or have any information, we'd like to hear from you. You can get in touch by filling in the form below, anonymously if you wish or contact us via WhatsApp by clicking here or adding the contact +44(0)7867825056. Only the Guardian can see your contributions and one of our journalists may contact you to discuss further.

Tell us
Among those countries was Indonesia, whose president, Joko Widodo, said he was importing millions of packs of both the flu drug Avigan and chloroquine. He said these medicines “have been proven to cure Covid-19 in other countries, although no one has discovered the Covid-19 antivirus”, according to the Jakarta Post.

Widodo, who has faced growing criticism over his handling of the outbreak, has since said there is “neither a cure nor an antivirus to Covid-19”.

The experiences of other countries, he said, suggested that chloroquine could be used to help patients to recover. Chloroquine would be made available only for prescription by hospital doctors.